Should EVENT_CONTEXT.setting be made optional and/or it's associated terminology updated?

A finding from the Swedish openEHR work is that the general usefulness of the attribute “setting” of EVENT_CONTEXT (see diagram below) and the choices available in associated terminology (see XML below) feel a bit too country/organisation specific (and old) to be mandatory in the RM in current form. 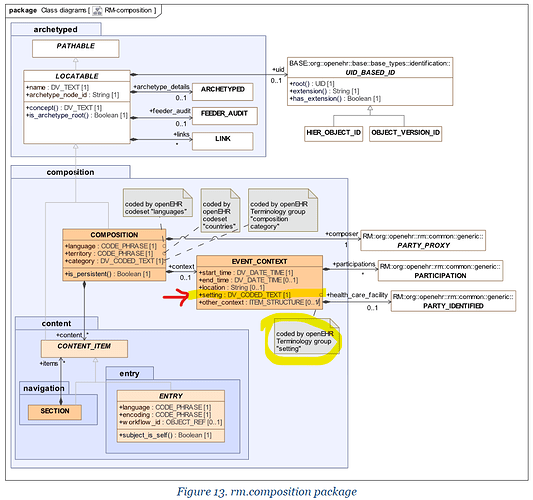 Completely agree. I make little use of this - the boundaries are increasingly blurred. Generally set it to ‘other care’. I would make it optional and also open for other terminologies e.g SNOMED or national coding systems

I also agree (and very recently asked @ian.mcnicoll about it). I think its a nearly unique case in the specifications where we are forced to use a kind of classification with no obvious origin.

A related topic would be, as it has been discussed at some point, to clearly define if that terminology codes are mandatory, or extensible, as it’s done in FHIR

The openEHR SEC has decided on the addition of the required | extensible | preferred | example ‘binding strength’ constraint modifier, following the model used in HL7 FHIR. The change is documented in openEHR CR SPECAM-68. The change to AOM2 spec looks like this in the UML: [C_terminology_code] We have yet to determine how it should look in ADL2. Currently, the various forms of terminology constraint look as follows in ADL2. ​items matches { ​ELEMENT[id11] occurrences matches {0..1…

or even just primary / hospital / other would be more useful. Then you can find out simple things like what procedures were delivered by hospitals that could have been delivered in general practice or somewhere else.

THat’s not wrong but there will often be other ‘not wrong’ splits applied locally and this is not terribly interoperable, as it is heavily dependent on the healthcare economy.

It also conflicts/collides a bit with XDS type metadata. So I would both make optional and make the termset an example.

Then you can find out simple things like what procedures were delivered by hospitals that could have been delivered in general practice or somewhere else.

If that is the main known use case I believe we’d get better granularity and flexibility for such questions by deriving statistics from the attributes health_care_facility (and sometimes possibly location) combined with organisational levels from an organisation registry/catalog for that specific state/country.

Are there any other known use cases? (Question #3 in the original post)

I agree with @ian.mcnicoll that opening it up to other (possibly local/national) terminologies would likely make the attribute more useful than the currently available code list.

In general we often want multiprofessional EHR notes (COMPOSITIONs) that are updated by different professions, so the split medical/nursing/allied in both primary care and secondary care creates more problems than it solves.

This is a theme I’m spending a lot of time and thought on. Especially since Nedap customers are mostly multidisciplinary teams. And I’m not sure I agree with the current statement. Could please elaborate on it so I can learn what you mean?
For me it makes me think about the discussion around problems. Where we wanted at first to record different names per discipline for the same problem/diagnosis where @ian.mcnicoll convinced us to record them separately and link them together. Audience specific problem name
Off course there are many perspectives and scenarios so I’m mainly curious and looking to share knowledge and align modelling patterns.