Following the discussion on today’s SEC call re: supporting linking in Archetypes, it became clear we needed a more sophisticated idea of what kinds of links / citations are needed just in the data. @ian.mcnicoll gave the example of BMI and nested problem list. @joostholslag has described care plans with links (so have I). I’ll ping @siljelb, @heather.leslie and @erik.sundvall here as well in case they have things to say.

I’ll just try to address the BMI example here for now. The challenge is that BMI is logically (in most doc’s minds) a data group consisting of 3 items - height, weight and the BMI (which will all be ELEMENTs containing DV_QUANTITYs, under a CLUSTER). The ‘problem’ we have in openEHR is that height and weight are separate archetypes, since those two things are regularly recorded for all sorts of reasons, not just BMI.

Additionally, recording a BMI might or might not involve measuring and recording weight or height - it might involve a weight measurement, and the (adult) patient might just say their height (since it doesn’t change for decades for most people), or there might already be a height somewhere in the EHR.

What @ian.mcnicoll wants to support is to make it always look like the BMI consists of the 3 items, but to allow the height and weight to really be references (aka citations) of the real height and weight ELEMENTs inside their original OBSERVATIONs, wherever those may be in the EHR (i.e. same COMP or not).

I have summarised the intention and a couple of solutions graphically: 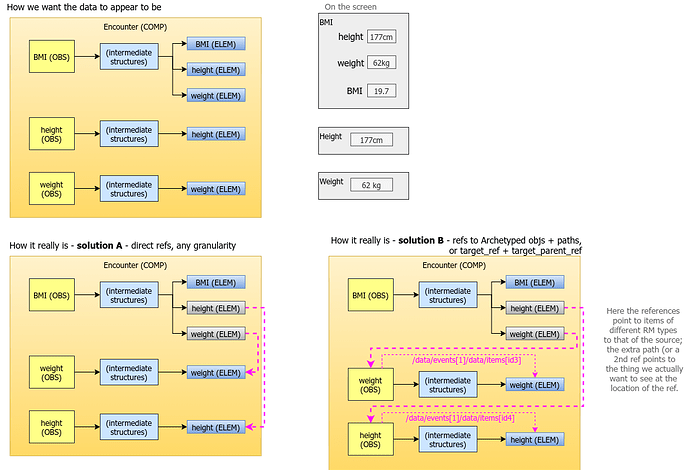 I have proposed two ways of referencing, see the lower half of the diagram.

I think Solution B is what is needed, i.e. the reference needs to point to a meaningful container (an ENTRY or something higher, e.g. a COMPOSITION), and then it needs to pick out the specific data element needed in the citing location, e.g. an ELEMENT - but it might also be an entire OBSERVATION, or CLUSTER etc.

I’ll show how these kinds of references could be modelled later on. But I’d like to know if our clinical modellers agree with the general characterisation of the need above.

Here’s what solution B would look like for the BMI source variables in other Compositions. 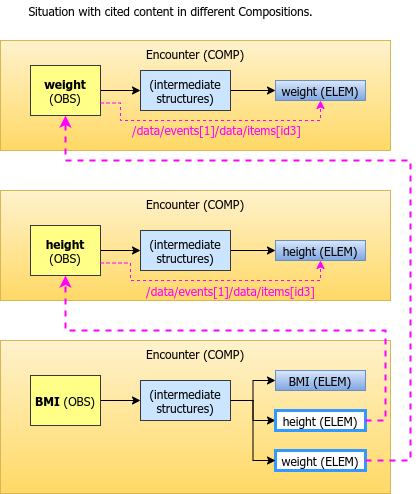 There’s a few more than that - here’s an analysis from a few years ago on the content types that could potentially be in a ‘report’.

I wasn’t originally thinking to try to cover query results in the question of references/citations but quite possibly we should. I’ll keep it in mind.

I think Solution B is what is needed

I agree.
I think what we need for this is

Some intesting usecase is for ZIB modelling (dutch national information models): Where they often refer to another model: e.g. the ‘procedure’ models refers to the ‘problem’ model for its ‘indication’ field. Though I don’t know if they distinguish between including in the model (use_archetype) vs citing a data instance (link). @pieterbos do you know?