Translations after archetype version update - how to overcome confusions

A hint to others getting confused. I didn’t quite understand the CKM translation upon/after version change.
Since the archetype was now in v1 and is missing Swedish translation (also see P.S. below) I thought I’d create a new translation for for v1, but when I tried to, it instead opeed my existing (still open) branch for translation from v0 and (even though I clicked on the start translaton under the v1 archetype - a bit confusing).
It was not possible to start a new translation for v1…

The solution was/is to backup your v0 translation to your local computer, then delete(throw away) the v0 branch and start over with a new branch for v1. 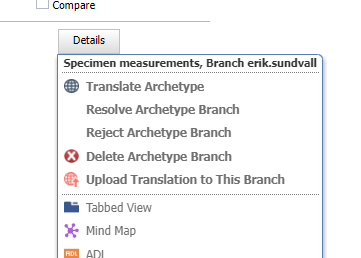 Many fields can be cut&paste-copied from your v0 backup.

Hope this saves somebody alse from confusion later.

Edit - after tip from @varntzen below : reject rather than delete the branch may make backing up unnecessary

P.S. Since I several times have gotten reflex responses regarding that nothing is guaranteed for what happens with translations of v0 archetypes and that it is smarter to wait until v1, I just want to clarify that I was NOT complaining about the fact that the v0-based Swedish translation wasn’t included in v1.

You can also edit the downloaded v0 translation adl to make it look like v1, and use the “upload translation” function before fixing up the translation through the “translate archetype” function. May save you some cutting and pasting

Hi Erik
The CKM doesn’t allow any user to have more than one active branch open. Must be a good reason for it, but I can’t remember right now

Instead of deleting the active branch, can you reject it? This way it will be easier to copy/paste.

It’s a bit irritating when changing only a comma in the original language, and all translations are overwritten. This can happen even with published archetypes, for example when fixing a typo.

But if there are changes of the semantics, or major improvements in element names or descriptions in a v0, or from v0 to v1, then exporting an old translation and import in the new is risky and should be done very carefully.

Thanks @siljelb and @varntzen - nice with some professional advice. Perhaps we should rename this thread and collect more translation and version maintenance tricks…

@varntzen if being careful during the CKM based “fixing up” part (described by @siljelb above), then it should be easy to spot differences.