A quick update to the openEHR community subscribed here on using Discourse. Over the last few months, the user base and set of categories (aka ‘discussion lists’ in old-school speak) has grown substantially. If you visit the site, you will now see a very rich set of groups and discussions: 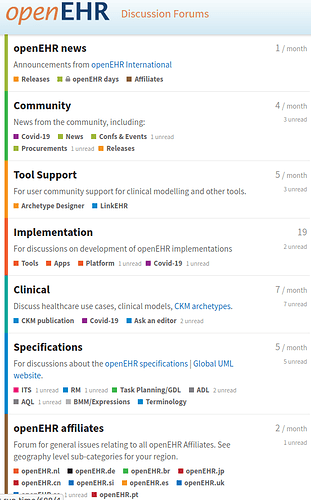 If you want to follow a category, don’t forget to:

Use the ‘bell’ control as shown below. 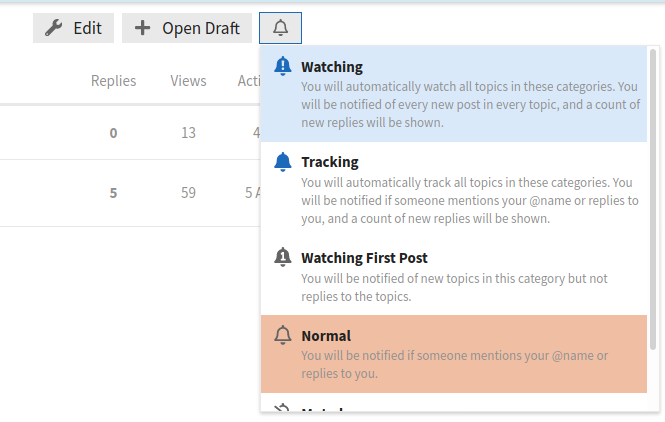 If you choose a top-level category, you will usually see a useful view like this of sub-catgories above the topic list: 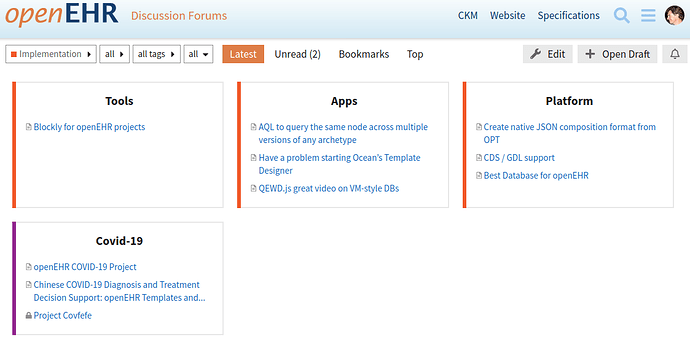 There is an Affiliates category for nascent and formal openEHR Affiliates. If you want to discuss openEHR in your country / region, and in your language, please join in there, or ask for a new sub-category if your country is not there. 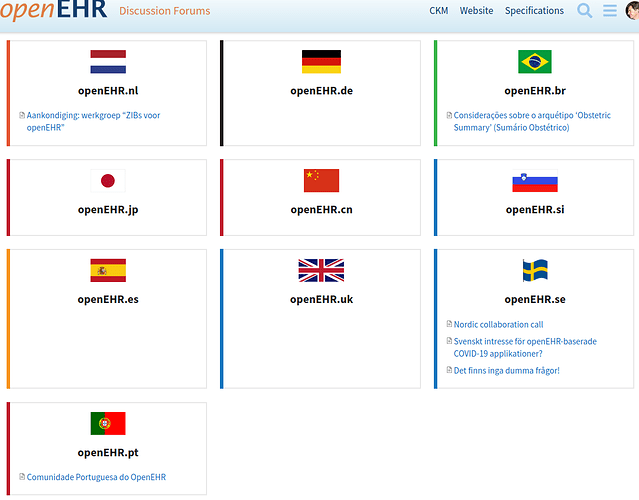 Don’t forget to join in and contribute your wisdom and experience! There are groups for everyone today, including developers, clinical professionals, modellers, CIOs and many more, and if we need more, just ask…

Use the feedback category to report issues and to ask for new (sub-)categories.

For the Spanish one would be better to be associated with Spanish speaking countries than to Spain as a country, because it fragments a community that is already very small.

I’m not sure what the best solution is here, because there are two possible needs:

The second is the original idea of affiliates. The language thing is just to make it convenient. But I don’t know how interesting it is to have a group for ‘Spanish’, since there probably isn’t much commonality in terms of clinical and commercial environment between Spain, and (say) Mexico, Chile, Uruguay, just to name a few ES-speaking countries, and all the Spanish language people here also speak perfectly good tech/clinical English…

We could certainly create some language groups anyway, but the danger might be that people end up discussing important things in just that language, and lose the benefit of wider international input.

Maybe we should run a poll of some kind to find out what the community thinks.

One of potential priorities would be bending the learning curve(s) for people with various background because openEHR is a daunting/overwhelming family of specifications tools and like.

That is actually a blocker for people that doesn’t speak or understands English very well, and was a problem of the openEHR community since it started: focused on English speakers.

If we say we have an international community, we should also try to attract people that doesn’t speak English.

he danger might be that people end up discussing important things in just that language, and lose the benefit of wider international input.

There are currently specific language discussions on these forums, I don’t see the problem on that. In fact that is the same problem I mentioned above but in the opposite direction, e.g. English speakers not understanding local discussions in Norwegian, Swedish or whatever.

My point is to have more inclusion and less fragmentation. Communities on Spanish speaking countries are really small, and until they have a nationwide project that includes openEHR, I guess it makes no sense to create country specific groups here.

For instance when we discussed with the Board that I would become an openEHR ambassador, the thing about language vs. country was discussed. I was reaching Spanish speakers with my online courses, and Uruguay is not interested in openEHR at all. So I can help driving attention to openEHR for other people that speaks my language but I can’t create a local community.

That is actually a blocker for people that doesn’t speak or understands English very well, and was a problem of the openEHR community since it started: focused on English speakers.

Well, I suppose it’s focussed on communications in the only default international language we have, which is English. But I get your point.

Do you think we should create some separate Spanish language category here, or what is the best approach to help in the way that you describe?

I can see challenges around the overlap of language-specific challenges where these do not line up with individual countries - Spanish being a good example, but I think there are probably manageable by those involved. I’d have no objection to there being e.g a Spanish language Category.

I think these are 2 completely different categories.
We use the English language in CKM and most of this Discourse site to cover all kinds of issues - not anything specific to UK or Australia or other English-speaking countries. It is primarily about language, I’d suggest, so that non-English speakers can participate equally…
If we want to discuss specific country topics - then we need to start another grouping… IMO

We have it - the affiliates category and sub-categories. Currently only the UK one is also an EN-language group, but clearly affiliates for Australia, US, Canada etc can be created if there is the interest.

One important additional note to existing users who may be ‘watching’ or ‘tracking’ existing top-level categories: we have been creating a number of sub-categories under the top-level ones, to make navigation easier.

However… if you were subscribed (i.e. watching etc) a certain top-level category, you will not automatically be subscribed to any sub-category, even though the latter is where the discussions will mainly be.

To correct this, please visit the site home page and have a look through the categories and their sub-categories, and subscribe to each one individually according to your interests.

If you don’t do this, you won’t receive appropriate email notifications, and the community will miss your input!