I have done some thinking on how to document the conformance specifications and framework in some detail, based on some of @pablo 's original ideas. You can see his diagrams in the current (very draft) Conformance Guide, in particular this one on ‘conformance artefacts’.

I propose a new version of this diagram that makes use of the existing ‘block diagram’ (love it or hate it), to try to explain a bit better the relationships between the various existing and needed artefacts. 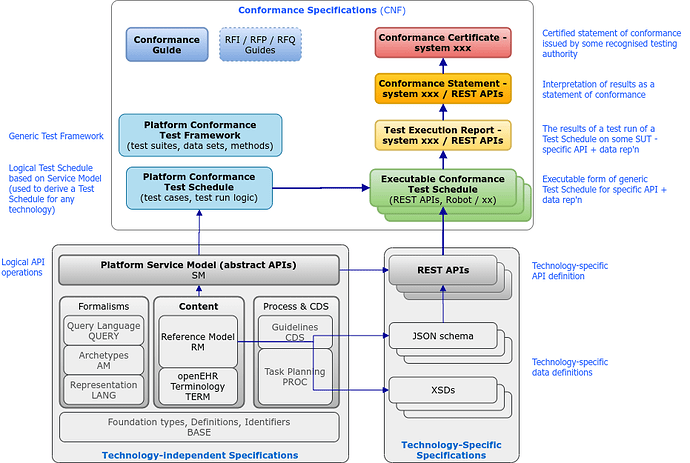 The top block ‘Conformance Specifications’ is the set of specifications we need to define Conformance testing and enable it to be reported. The Test Execution Report, Conformance Statement and Conformance Certificate aren’t really specifications in the ordinary sense of course - they would be some kind of document template or definition of the minimum sections & fields of such reports.

The main ‘specifications’ we need are:

This might strike some as too complicated, but I am fairly convinced it is the minimum we can get away with to satisfy contractual as well as engineering needs. Essentially, it boils down to:

How does the group feel about this approach?

By the way, the first link do not have the correct path. The link to the Conformance Guide is:
https://specifications.openehr.org/releases/CNF/latest/guide.html

and the second one is broken.

Sorry about that - I changed the links to the more standard format we use in openEHR after posting this; links fixed now.